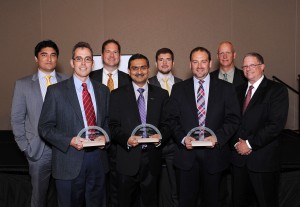 (WASHINGTON)—The I-95 Express Lanes project in Virginia and two former public officials from Florida and Pennsylvania have been recognized as models of excellence in innovative transportation financing by the American Road & Transportation Builders Association (ARTBA).

P3 Entrepreneurs of the Year: Given to two individuals who have made outstanding contributions to the forward progress of P3s in the U.S. transportation industry.

Ananth Prasad, who joined HNTB Corp. as senior vice president in January 2015, spent 22 years with the Florida Department of Transportation (FDOT), including a four-year appointment by Gov. Rick Scott to serve as the agency’s secretary.

Under Prasad’s leadership, FDOT led the nation in the use of design-build–finance project delivery, and developed an internal P3 expertise/strategy that set a precedent for other transportation agencies across America. Prasad was instrumental in the development of significant P3 projects, including the: $2.3 billion I-4 Ultimate Project in Orlando—the largest availability payment based P3 project ever undertaken in the U.S.; the $1.8 billion I-595 Express project in south Florida; and the $1 billion Port Miami Tunnel project.

Bryan A. Kendro was selected in 2012 to serve as the director of the newly-created Office of Policy & Public-Private Partnerships at the Pennsylvania Department of Transportation (PennDOT).

He led the development of the program’s “Implementation Manual & Guidelines,” and delivered a series of innovative P3 projects that not only will dramatically improve the Commonwealth’s transportation network, but also deliver significant savings and efficiencies for taxpayers. His strategic guidance led the state to utilize a P3 approach for replacing 558 structurally deficient bridges under the $899 million Rapid Bridge Replacement Project (RBRP) program. The single largest road project in Pennsylvania history and one of the largest U.S. P3s in 2015, it received the largest allocation of U.S. DOT Private Activity Bonds in history ($721.5 million.  It will save taxpayers 30 percent on the cost of bridge replacements, while reducing the time to two years instead of the 10 it might typically take to do similar work under traditional methods.

Kendro also co-founded the P3 Owners Council, connecting P3 directors around the country to help share best practices, and serves as a member of ARTBA’s P3 Division board of directors.

Project of the Year: Spotlights a project that demonstrates the value P3s bring to U.S. transportation development.

The $1 billion dollar, I-95 Express Lanes stretch over 29 miles in northern Virginia, and feature an innovative dynamic pricing system that adjusts prices based on real-time traffic conditions, an all-electronic tolling system that eliminates the need for toll booths, dedicated incident response and a high-tech operations center. The high occupancy toll (HOT) lanes, which opened in December 2014, are helping alleviate congestion on one of the nation’s busiest roadways.  The project team included the: Virginia Department of Transportation, Virginia Department of Rail & Public Transportation, Federal Highway Administration, Transurban Group and Fluor Corp.

Established in 1902, ARTBA is the “consensus voice” of the U.S. transportation design and construction industry before Congress, federal agencies, the White House, news media and the general public.