The U.S. transportation construction market is expected to grow 3.1 percent from $185.9 billion in 2014 to $191.7 billion in 2015, according to the ARTBA forecast model. This is slightly above anticipated growth in the overall U.S. economy—U.S. Gross Domestic Product is expected to grow between 2.6 and three percent, according to the U.S. Federal Reserve.

The forecast for the largest segment of this market—highway, street and related work—is tempered by uncertainty over long-term federal funding, which represents 52 percent of state department of transportation (DOT) capital outlays, and still recovering state and local budgets.

Outside of construction, state and local governments are expected to spend an additional $38.5 billion for maintenance work; $13.2 billion for in-house and consultant planning and design services; and $7 billion for right-of-way purchases as part of their highway and bridge programs.

Some forecast highlights include:

Contractors will have an additional $30 to $40 billion in business opportunities from private highway and bridge work that is completed as part of housing developments and larger commercial structures, separate from parking lots and driveways.

Bridges & Tunnels
The bridge and tunnel construction market is expected to remain strong, increasing from $30.8 billion in 2014 to $31.3 billion in 2015. Bridge construction has grown from 19.6 percent of all highway and bridge work in 2000 to 37.3 percent in 2014. The share of bridge work is forecasted to continue to grow in the next five years.

Railroads, Light Rail & Subways
ARTBA is forecasting that light rail, subway and railroad construction will increase from $18.3 billion in 2014 to $20.9 billion in 2015, driven largely by private investment in Class 1 freight tracks and structures.

Airport Runways & Terminals
The total value of airport runway and terminal construction will grow from $12.5 billion in 2014 to $13.1 billion in 2015, according to the forecast model. There is significant demand for airport infrastructure investment at major U.S. airports to accommodate growth in the air freight shipments and passenger enplanements.

Ports & Waterways
The ports and waterway construction market will increase slightly to $2.8 billion in 2015, up from $2.7 billion in 2014, largely driven by expanded sea trade expected with completion of the Panama Canal improvement project in 2016.

ARTBA’s proprietary econometric model takes into account a number of economic variables at the federal, state and local level. The forecast measures the public and private value of construction put in place, published by the U.S. Census Bureau. The ARTBA estimate for the private driveway and parking lot construction market are separate. 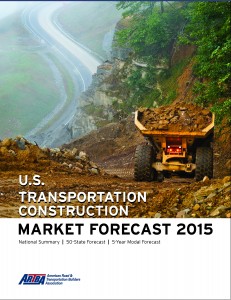 The comprehensive 2015 ARTBA Transportation Construction Market Forecast can be purchased for $100 at www.artba.org/shop.