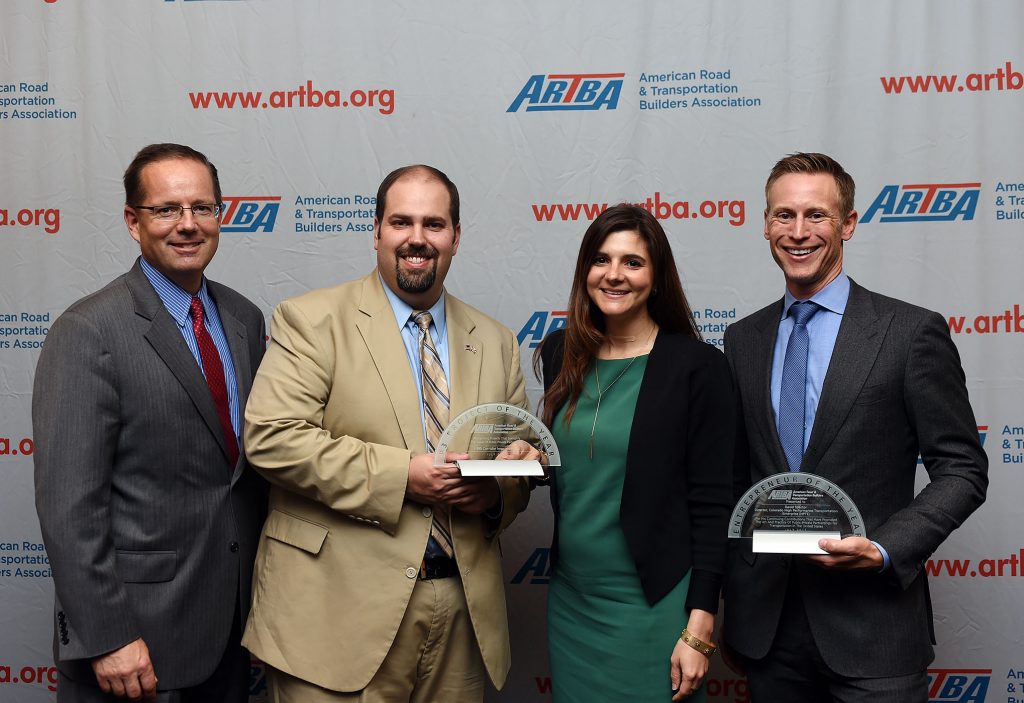 (WASHINGTON)— The I-595 Corridor Improvements Project in Florida and David Spector, director of the Colorado High Performance Transportation Enterprise (HPTE), have been recognized as models of excellence in innovative transportation financing by the American Road & Transportation Builders Association (ARTBA).

This award is given to an individual who has made outstanding contributions to the forward progress of P3s in the U.S. transportation industry.

The HPTE is a division of the Colorado Department of Transportation (CDOT) that uses P3s, tolled managed lanes, and other innovative methods to finance and improve the state’s surface transportation infrastructure. Spector’s career has been focused on providing strategic direction and advice on high-profile public-private infrastructure projects. While at HPTE, he has been featured at P3-related conferences and is a resource to other state and local governments seeking to learn more about these initiatives. In the next year, Spector will be leading HPTE’s efforts working with academic institutions to educate state and local elected officials, governments considering P3s, and other stakeholders about the realities, myths and implementation of P3s, to help them understand how they can be used for a variety of infrastructure needs.

Spector has been a leader for the advancement of P3s for both CDOT and other public agencies. He oversaw the completion of the U.S. 36 Express Lanes P3 project, which ARTBA named 2016 P3 Project of the Year, and is currently in the midst of the procurement for the Central 70 Project.  He also led HPTE through several organizational and structural changes, aligning operations more clearly with CDOT’s strategic goals, including the focus of its role as toll operator of Express Lanes, and integrating with other divisions within CDOT. He has refined several business rules, including establishing a PR Procurement Management Manual so that current and future P3 projects will benefit from clear and consistent internal and external processes. In the process, HPTE has evolved from a start-up P3 delivery organization to an established business which can serve as a model for other agencies as they endeavor to enter or grow their own programs.

P3 Project of the Year: I-595 Corridor Improvements in Florida.

The award annually spotlights a project that demonstrates the value P3s bring to U.S. transportation development.

The I-595 Corridor Improvements is the state’s largest transportation project and also its first P3. I-595 is part of Florida’s Strategic Intermodal System that serves the major east-west link in Broward County. Since the mainline opening in 1989, I-595 endured a steady increase in traffic volume that led to congestion. To ensure sufficient capacity, Florida Department of Transportation (FDOT) and its team developed several improvements to help sustain the region’s growth, including reconstructing and widening the Turnpike, improvements and modifications to nine interchanges, and reversible express lanes that are tolled at varying rates throughout the day. The improvements were successfully completed on time while minimizing disruptions of the 200,000 vehicles traveling the corridor daily.

The $1.8 billion deal reached financial close in March 2009, also making it the first in the U.S. transportation sector to use an availability payment compensation structure, helping to pave the way for future P3 projects in Florida and the U.S. The design, build, finance, operate, and maintain (DBFOM) project opened to traffic in March 2014 and epitomizes the benefits of P3s by advancing much needed transportation improvements and allowing private financing to make up the state’s funding shortfall that could have delayed work by 20 years or more. The project team included FDOT, RS&H, Nossaman LLP, Interstate 595 Express, Dragados USA, ACS Infrastructure Development, Inc., and AECOM.