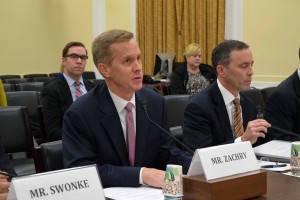 Testifying before a House Oversight & Government Reform Committee hearing on the Moving Ahead for Progress in the 21st Century (MAP-21) Act of 2012 “Program Consolidation,” Zachry thanked members for their efforts over many years “working to cut through the bureaucratic red-tape that has plagued the transportation project planning and approval process.”

He explained how continuing to streamline the project review and approval process for the nation’s infrastructure is essential to assuring the public that government is making every transportation dollar go as far as possible without sacrificing necessary regulatory safeguards. MAP-21 included provisions aimed at shortening the nine to 19 years it typically takes to plan, gain approval of, and construct a major new federally-funded highway project.

Zachry, who is the president and chief executive officer of San Antonio-based Zachry Corporation, said ARTBA members must directly navigate the regulatory process to deliver transportation improvements. As such, they have first-hand knowledge about specific federal burdens that can and should be alleviated.

He added that many of MAP-21 reforms are, however, discretionary, not mandatory. “The more state and federal agencies choose to use the opportunities afforded by MAP-21, the greater the positive impacts will be,” Zachry testified.

But without the assurance of long-term federal funding, states are often reluctant to proceed with large, complex, multi-year projects that could benefit from time and money saving reforms included in MAP-21, Zachry said.

“The recent enactment of a five-year highway and transit reauthorization law should help remedy this concern,” he concluded.

The full text of Zachry’s testimony is available in the “Government Affairs” section of www.artba.org.