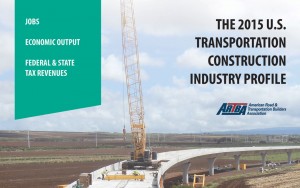 Website—www.transportationcreatesjobs.org—Contains Data for all 50 States

(WASHINGTON)—As millions of Americans prepare to travel this Labor Day weekend, a new report shows just how critical investments in transportation infrastructure projects are to the U.S. economy and quality of life.

To put these statistics and others into an easy-to-use format, ARTBA has created a website, www.transportationcreatesjobs.org, which includes a clickable U.S. map with national data.  State data is also available and includes statistics on: job creation, federal and state payroll tax revenue generated, the scope and conditions of each state’s transportation network, value of freight shipments, commuting patterns and motor vehicle crashes.

But this is only a small part of the picture, according to Black.  Without the infrastructure built, maintained and managed by the nation’s transportation construction industry, virtually all of the major industry sectors that comprise the U.S. economy—and the American jobs they sustain—would not exist or could not efficiently and profitably function.

“The simple fact is that nearly 63 million American jobs in just tourism, manufacturing, transportation and warehousing, agriculture and forestry, general construction, mining, retailing and wholesaling alone are dependent on the work done by the U.S. transportation construction industry,” Black says.

She warned there are several major challenges that threaten the overall efficiency of the nation’s transportation network:

“The increase in traffic congestion and growth in vehicle miles traveled are clearly tied to the improving U.S. economy and creation of new jobs,” Black says.  “However, these trends also underscore once again the importance of having a comprehensive national strategy that significantly boosts transportation investment to address these predictable mobility challenges.   Congress must do its part this fall by completing action on a long-term highway and transit bill.”

The U.S. Senate passed its version of a multi-year transportation bill, the DRIVE Act, by a 65-34 vote on July 30.  The House is scheduled to debate its version of the legislation when it returns to Washington this month.

Data in the profile was compiled using the U.S. Census Bureau’s “County Business Patterns” report and the U.S. Commerce Department’s sophisticated Input‐Output Accounts, as well as other public and private sources.