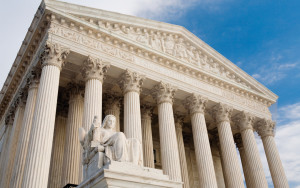 (WASHINGTON)— Transportation construction contractors should have their day in court when they believe state agencies have misapplied federal regulations, the American Road & Transportation Builders Association (ARTBA) is arguing to the U.S. Supreme Court.  The association filed a “friend of the court” brief Feb. 16 in the case of Dunnet Bay Construction Company v. Randall S. Blankenhorn, supporting the Illinois contracting firm’s petition for an appeal to the nation’s highest court.

Dunnet Bay had the low bid on a contract relating to the reconstruction of Chicago’s Eisenhower Expressway, a federal-aid project, in early 2010.  The Illinois Department of Transportation (IDOT) rejected the bid for failing to meet the Disadvantaged Business Enterprise (DBE) program participation goal on the project. IDOT ultimately rebid the contract and awarded it to another contractor.

Subsequently, Dunnet Bay filed suit against IDOT in federal court for the Central District of Illinois.  Among other points, the firm alleged IDOT had a “no waiver policy” for its DBE program, contrary to federal law, and therefore gave no meaningful consideration to Dunnet Bay’s documentation of its good faith effort to meet the project’s DBE goal. Dunnet Bay also questioned the methodology of IDOT’s DBE goal-setting for this high-profile project, which carried political overtones because the incumbent governor at the time was facing a strong challenge in the upcoming Democratic primary.

In February 2014, the federal District Court ruled for the defendant IDOT.  Dunnet Bay subsequently took its case to the U.S. Court of Appeals for the Seventh Circuit, which affirmed the District Court and dismissed Dunnet Bay’s claim in August 2015. In siding with IDOT, both courts ruled that a prime contractor on a federal-aid highway project does not have a cause of action if a state agency appears to have followed federal regulations, such as those for the DBE program, even though the agency may have broad discretion in doing so.

In its “amicus” brief, ARTBA stressed that, if allowed to stand, the lower court’s holding would severely curtail review of state transportation agencies’ implementation of federal regulations, opening the door for egregious interpretations outside the bounds of the U.S. Constitution. “[W]hen administrative decision makers understand that meaningful judicial review is unlikely, they face no such constraints, and the risk that they will act for impermissible reasons is heightened accordingly,” ARTBA argues.

There is no set timeline for the Supreme Court to decide whether or not it will hear the Dunnet Bay case.

For more than 20 years, ARTBA has been the transportation design and construction industry’s primary legal advocate.  In total, ARTBA’s efforts have allowed over $50 billion in approved—yet challenged—state, regional and local transportation projects and plans to move forward since 1993.  ARTBA has also been involved in numerous cases which may set national policy precedents relating to transportation construction-related laws and regulations.

The full text of ARTBA’s brief can be found in the “Current Advocacy Efforts” section of www.artba.org.