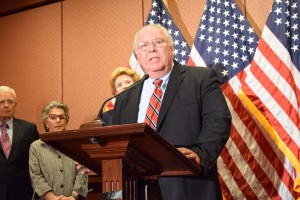 “And if one thing has been learned over the past decade, it’s that neither political party has had the will to enact a long-term funding solution when they had the numbers and opportunity to do it. It is going to take bipartisan cooperation… a bipartisan solution… and bipartisan political risk to get the job done.

“And by long-term solution, we do not mean a four- to six-year patch. That will just leave us facing another $16 billion a year-plus funding cliff at the end of the next authorization. We want a sustainable funding solution to put this critical national program back on solid footing for the next decade.

“While some are worried about the political consequences of voting for a real trust fund fix, the rest of America is worried about commute times growing… bridges being closed… shipping costs increasing… and jobs being lost.

“It’s time for both parties to work together for America to put this behind us.”