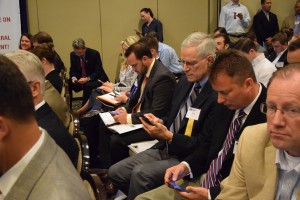 (WASHINGTON)—The American Road & Transportation Builders Association (ARTBA) announced the launch of a digital media campaign to amplify the voices of the transportation design and construction industry as Congress nears critical deadlines on how to fund road, bridge and public transit improvement projects.

At issue is the federal Highway Trust Fund (HTF), which is the source, on average, of more than 52 percent of highway and bridge capital investments made annually by state governments. The current federal highway/transit funding authorization expires on May 31 unless Congress takes action, and the next HTF cash crisis could occur later this summer.

ARTBA is utilizing the platform of Phone2Action, a Washington, D.C.-based digital grassroots company, to help its members and supporters contact Congress more easily through social media, phone calls and email.

With 90 percent of Americans owning cell phones and nearly 75 percent using social media, along with the fact that all 100 U.S. senators and 97 percent of the U.S. House of Representatives have Twitter and Facebook accounts, the Phone2Action platform makes it easy for the industry’s grassroots activists to use their phones or tablets to reach elected officials with messages about the need to fix the HTF and pass a long-term transportation bill.

The new campaign – with the hashtag #fixthetrustfund – launched April 14 during ARTBA’s Federal Issues Program in the Nation’s Capital. In just three days, ARTBA members and industry professionals have connected with hundreds of policy makers, sending more than 1,075 emails, tweets and Facebook postings to their members of Congress, underscoring popular support for fixing the HTF.

The ARTBA campaign is accessible here. Information about the campaign also is being made available through an instant alert text messaging system, which can be accessed by texting HIGHWAY to 52886.

Established in 1902, the Washington, D.C.-based ARTBA is the “consensus voice” of the U.S. transportation design and construction industry before Congress, the White House, federal agencies, news media and general public.