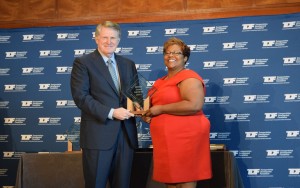 Outreach Campaigns: Programs that promote safety through implementation of employee and/or public education campaigns. There were winners at the national, and state and local levels in the outreach campaign category.

To mark National Work Zone Safety Awareness Week, project crews on the 30-mile, $1.4 billion 35Express project in North Texas designed and built 15-foot “monsters” from recycled orange construction barrels, safety and channelizer cones to serve as reminders to the traveling public to observe safety guidelines in work zones. To keep the community involved, AGL Constructors implemented a voting system where motorists were encouraged to vote via Facebook for their favorite barrel monster. This year’s monsters included King Kong, AGL Airplane, The Excavator, Emmet and The Eagle, and featured important safety messages encouraging motorists to stay off their phones, follow the flagger, reduce their speed and pay attention to signs while driving through a work zone.

Caltrans created an authentic campaign utilizing young children of current Caltrans maintenance workers to deliver a deeply personal and compelling message to the public – “Be Work Zone Alert.” The educational campaign, featuring nearly 90 billboards and public service announcements, aired in 23 markets across California and has helped raise awareness, improve public safety and reduce collisions, injuries and fatalities on the state’s highways. The multimedia effort has delivered more than 42 million digital ad impressions and has reached over 432,000 people while addressing evolving safety messages like work zones may not always be marked by cones, safe driving means more than slowing, and drivers must be alert and avoid distractions in work zones.

In an effort to educate new drivers on the dangers of driving within work zones, DBi Services delivered a series of Work Zone Safety presentations to over 40 high schools in Virginia, Georgia, Texas and Florida. Industry experts explained to teenagers the importance of Florida’s “Move Over” law and its recent expansion to include vehicles with amber flashing lights working along the roadside.

In addition to engaging with high school students, DBi Services, in conjunction with National Work Zone Safety Awareness Week, sponsored a series of billboard ads and roadway message boards to remind motorists of the importance of driving carefully in roadway construction zones. The billboards appeared along stretches of I-95 in Brunswick, Georgia, potentially reaching 70,000 motorists per day.

To reduce the risks associated with entering and exiting work zones, Cornejo & Sons developed a color coded flag system to keep the public and workers safe when operating within a work zone. The company distributed instructions on windshield stickers and a training memo to all contractors, employees and third party groups to educate them on color codes for each flag. The team created and organized a safer work zone by marking checkered flags at the exits and colored flags at various entrances to indicate the different delivery points for materials. By clearly marking each entrance, and designating entrances for different types of vehicles, Cornejo & Sons decreased the hazard and congestion created by fleet trucks slowing to search for work zone entrances, leading to fewer employee accidents in work zones.

In collaboration with Micro Systems, a Kratos company, Royal Truck & Equipment developed the next generation of roadway work zone safety – the innovative ATMA (Autonomous Truck Mounted Attenuator). At its core, a TMA Truck, or safety truck, serves as a protective crash barrier, preventing vehicles from entering work zones and helping to save workers’ lives. By outfitting the TMA truck with driverless technology, drivers will be removed from the cab of one of the most dangerous vehicles to pilot. In addition to being autonomous, the truck mimics the direction and speed of a lead vehicle through the use of sensors and can be controlled remotely through GPS Waypoint navigation. Two autonomous trucks will make their debut as part of a highway construction project in Florida by the end of the year.

Celebrating its 30th anniversary in 2015, the ARTBA Foundation is a 501(c)(3) tax-exempt entity created to “promote research, education and public awareness.”  It supports an array of initiatives, including educational scholarships, awards, executive education seminars, roadway work zone safety and training programs, special economic reports and a national exhibition on transportation.