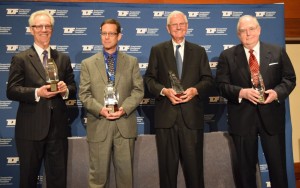 Induction for 2014 and 2015 Classes Takes Place in Philadelphia

(WASHINGTON)—The “granddaddy” of urban interchange design, the Pennsylvania pioneer of the welded bridge concept, a former congressional transportation investment champion and one of the nation’s top transportation engineering researchers and educators were inducted Oct. 1 into American Road & Transportation Builders Association (ARTBA) Foundation’s “Hall of Fame.”  The ceremony took place at a lunch hosted during ARTBA’s National Convention in Philadelphia.

Launched in 2010, the “Transportation Development Hall of Fame” honors individuals or families from the public and private sectors who have made extraordinary contributions to U.S. transportation development during their careers.  A committee of judges comprised of construction industry journalists annually reviews nominees in two categories:

Transportation Design & Construction Industry Innovators:  Honors the men and women who discovered or created a “game changing” product or process that significantly advanced transportation design, construction and/or safety.  It seeks to honor the original innovator.

Transportation Design & Construction Industry Leaders (Individuals or Families):  Recognizes men, women and families who have made significant contributions—beyond just having successful businesses or careers—that have notably helped advance the interests and image of the transportation design, construction and safety industry.

Wallace Hawkes is credited with originating the design and first application of the single point urban interchange, or SPUI, more than 40 years ago on State Route 60 in Clearwater, Florida.

The innovation became widely used in cities across America, particularly in dense urban areas.  Its unique feature was an inverted left turn lane, which allowed left turns to be made simultaneously over or under a free flowing road and in a considerably smaller space.  An additional space saving feature was the use of a single traffic signal to control the interchange compared to the two or more signals used at conventional interchanges.

“Give good measure.”  These were the words Sanford H. High communicated to his employees when he launched a small welding shop in Lancaster, Pennsylvania, in 1931.

From its humble roots, High Welding Company was established with a keen focus on innovation and serving customers-and serving them well.  This came to be known as “The High Way,” a set of founding principles that today still very much permeates the diverse and growing number of organizations that are part of the High companies.

He pioneered the welded bridge concept, saving time and money for cash-strapped highway departments during the Great Depression.  He convinced skeptical engineers that highway bridges presented a new frontier for welding instead of riveting.  High’s tenacity paid off during a 1933 experimental welded bridge project in York County, Pennsylvania.

High Welding Company grew in the number of workers and job complexity, and in the late 1950s automated welding equipment was adopted, revolutionizing heavy girder construction and leading the movement to faster, lower-cost submerged arc welding; the predominate process in use at High Steel Structures, LLC, today.  An expansion of Sanford’s initial vision, High Steel Structures has gone on to become one of the largest—and most successful—fabricators of steel bridge superstructures in the United States.

Civil engineering professor, Dr. Mike Walton, was the first member of ARTBA’s Research & Education Division to be elected chairman of the board back in 2006.  Now, he’s the first educator inducted into the Hall of Fame.

Since joining The University of Texas at Austin in 1971, he has been a transformative figure connecting academia with industry, public policy and government through his consulting relationships with approximately 30 state transportation departments and his volunteer leadership positions in national organizations.  Walton is a past chair of the Transportation Research Board executive committee, and founding member and a chairman of the Intelligent Transportation Society of America.  He’s also been a leader at the state level, having been appointed by the Texas governor to chair the committee responsible for defining the state’s transportation funding and mobility needs by 2030.

Among his many career honors are being: named one of “America’s Top 100 Private Sector Transportation Design & Construction Officials of the 20th Century” (2004), selected as the recipient of the Theodore M. Matson Memorial Award from the Institute of Transportation Engineers (2011), and presented with the Transportation Research Board’s W. N. Carey, Jr., Distinguished Service Award (1998).  He also received an Outstanding Projects and Leaders (OPAL) award from the American Society of Civil Engineers to recognize and honor his lifetime excellence in furthering civil engineering education.

For more than 40 years, as a congressional staffer and then a senior member of the U.S. House of Representatives, Oberstar combined an encyclopedic knowledge of intermodal transportation issues with a practical ability to forge consensus among parties with divergent perspectives.  The end result was a long, unmatched list of legislative achievements in the transportation arena.

Oberstar was a recognized authority on aviation safety matters and chaired the House Aviation Subcommittee from 1989-94, and the Subcommittee on Investigations and Oversight from 1987-1989.  He successfully fought for safer airline cabins, adequate emergency exits, and floor-proximity directional lighting.

He served as chairman of the House Transportation & Infrastructure Committee from 2007-2010.  He also was a driving force and author of historic federal highway, bridge, and public transportation investment laws in 1991, 1998 and 2005.

The 2014 Hall of Fame class, announced last November, was also inducted at the Oct. 1 lunch and included:

Celebrating its 30th anniversary in 2015, the ARTBA Foundation is a 501(c)(3) tax-exempt entity created to “promote research, education and public awareness.”  It supports an array of initiatives, including educational scholarships, awards, executive education seminars, roadway work zone safety and training programs, special economic reports and a national exhibition on transportation.