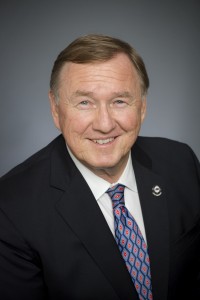 Ivanoff’s career in the transportation design and construction industry spans nearly 40 years.  He drives strategy and development for the venerable New York City-based engineering and architectural design firm, which has designed some of the city’s most iconic superstructures.

During his acceptance speech, Ivanoff outlined several key goals for the year ahead as chairman.

First, ARTBA will continue driving the transportation funding policy debate in the Nation’s Capital to help ensure post-election congressional action on a long-term and sustainable revenue stream for the Highway Trust Fund (HTF).  Once an HTF solution is identified, the association will continue to lead the industry charge in advocating for a significant boost in federal transportation investment as part of the reauthorization of MAP-21.

“Grassroots mobilization is the key to legislative success,” Ivanoff said. “Our members are going to have to get out there, attack Capitol Hill, and let their elected officials know that robust transportation investment is crucial to the economic vitality of the country.”

Ivanoff plans to leverage the 20th Anniversary of the ARTBA Foundation’s Young Executive Development Program to expand its leadership programs and outreach to the next generation of industry leaders.

Membership development is also key to the association’s future growth, and Ivanoff, as a past president of the ARTBA International Affairs Advisory Council, says his focus will be not just on companies at home, but also on international firms doing business in the U.S.

Finally, Ivanoff said ARTBA will be announcing new initiatives in the safety and risk management arenas in coming months.

His portfolio of professional affiliations also includes working closely with the Society of Military Engineers NYC Post, and serving as a long‐standing member in several other industry organizations such as the Institute of Transportation Engineers, American Society of Civil Engineers, and the Women’s Transportation Seminar.

Ivanoff is a graduate of Polytechnic Institute of Brooklyn and holds a B.S. in civil engineering and M.S. in traffic engineering and transportation planning.  He is a registered professional engineer in 21 states.

He and his wife, Robin, live in New Jersey.

Established in 1902, ARTBA and its members build a better America through the design, construction and continual management of the nation’s multi-modal transportation network.