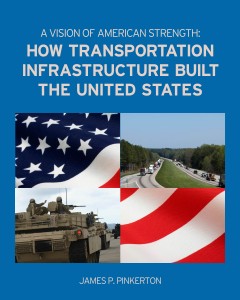 (WASHINGTON)—Investing in roads, bridges and other transportation infrastructure has always been and remains the best way to build America’s economic, political, military, strategic and social strength, according to a new book by journalist, thought leader, and U.S. domestic policy expert James P. Pinkerton.

The nation’s leaders understood this concept even before the American Revolution, Pinkerton writes.  Young George Washington developed road and canal routes. Later, Alexander Hamilton helped enshrine the power to “regulate commerce” and “establish Post Offices and post Roads” in the U.S. Constitution. That is, the originating document of American governance makes specific reference to the centrality of infrastructure.

Moreover, our Third President, Thomas Jefferson, after acquiring the Louisiana Territory and facing up to the challenge of the U.S. becoming a continental power, became a strong supporter of public investment in “roads, canals, rivers, education, and other great foundations of prosperity and union,” culminating in the visionary Gallatin Plan.  In a word: infrastructure.

Pinkerton details how this belief fueled the growth of “American Strength” through the 19th and 20th centuries, in both Republican and Democratic administrations: Abraham Lincoln and the Transcontinental Railroad; Theodore Roosevelt and the Panama Canal; Franklin D. Roosevelt and the Works Progress Administration, which built a wide range of infrastructure projects; and Dwight Eisenhower and the Interstate Highway System.

Yet bipartisan support for infrastructure investment began to fracture in the 1970s, Pinkerton writes. On the left, the environmental movement got the better of pro-growth Democrats. On the right, libertarian ideologues convinced Republicans to starve government and turn public works into private projects.

Ironically, it was conservative Ronald Reagan who made the last great defense of infrastructure investment when he supported an increase in the federal gas tax to exclusively finance new transportation improvements. “America can’t afford throwaway roads or disposable transit systems,” Reagan said in a 1982 radio address, reminding the nation that what we fail to repair today will cost many times more tomorrow.

Pinkerton argues that “a new and comprehensive infrastructure vision is needed now, more than ever.” This key to economic prosperity and American Strength should not be politically controversial. “There is more common ground between the parties on transportation infrastructure than on most other domestic or foreign issues,” he writes. Boosting investments in transportation infrastructure and developing new “Critical Commerce Corridors” to move goods are potential solutions for rebuilding America.

Pinkerton has been a contributor to the Fox News Channel since 1996. In addition, he has written for The American Conservative magazine and Breitbart News, and also has written for The New York Times, The Washington Post, National Review, The New Republic, Foreign Affairs and other publications. Previously, he worked in the White House domestic policy offices of Presidents Reagan and George H. W. Bush.

A Vision of American Strength: How Transportation Infrastructure Built the United States is a project of the American Road & Transportation Builders Association’s (ARTBA) Transportation Makes America Work® program, which is aimed at building public and political support for increased surface transportation investment.